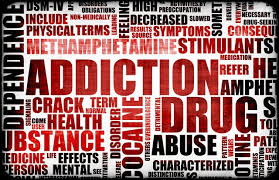 Addictions of all kinds, whether that be addiction to cigarettes, addiction to alcohol, crack, heroin, crystal meth, love, affection, obsessive compulsive thoughts, whatever our addictions are. And listen, no one gets off free. You might be all, "I have no addictions. Oh, I don't drink, smoke, do drugs, hire hookers. I do none of that. I'm a good boy or girl." But guess what, jackass? You do have an addiction. We all do. Some addictions are a bit more brutal, a bit harder on us, on our minds and our bodies, than others, but everyone's got addictions, including myself. It's just about minimalizing those destructive ones, and banishing them, and having more balance in your life, if you will.

Oftentimes addictions are also unresolved emotions, they are patterns that people employ in their life to avoid doing certain things, to avoid taking action on certain things. And as destructive as that addiction may be, it's also a sense of comfort for some people. Now, let's talk about addictions, and patterns in life, and the way that we are. Is it nature or is it nurture? Are we born a certain way? Are we born an addict? Or are we nurtured into that...nurture seems the wrong word but it's the right word, through life, through parents, through media, through significant others, through friendships and things that we do?

I tend to believe, and...we can't prove either of them. But I tend to go with that addiction is about nurture. I don't believe, I don't subscribe to the theory that you are born an addict. There is an exception to this and that would be a baby if its mother while in pregnancy, in that nine month period, is taking some hardcore narcotics, be that crack, heroin, crystal meth, then babies can be born with an addiction there and then, but that's very, very few, and I don't think in seeing over 5,000 clients I've ever seen somebody whose mother was a crack addict, crystal meth addict, or was ingesting one of those specific hardcore Class A narcotics. I've never experienced that, but I know they exist. So with the caveat of that, and even those people who grow up can overcome it, I believe it's nurture. A sidenote, a lot of people will use the excuse, yes and this may upset some people and I hope it does annoy you, I hope this does poke some of you, "Well, my dad was an alcoholic, my mum was a junkie in my teenage years, my brother was on crystal meth," yada yada yada. "This is why I am this way because I...I'm this way because they made me this way. They made me this way. I grew up in this situation, so I became an addict." That may very well be something that triggered you. You were in a situation, and then many people that will use that, "Well, my dad was an alcoholic, so it's hereditary. My mom was a crack addict after birth, it is hereditary. My brother or my sister was addicted to," enclose the Class A drug here, "so that's why I am." And yeah, yeah, you could use that. It's a really good reason. It's a really good excuse as to why you're fucked up and having bad behavior. You can use it and there's a lot of psychotherapists that will take your money, listen to that story for many, many years and you'll still end up being broken and being a victim of yourself and not overcoming that problem.

See, a story from my life was I grew up with a father that pretty much was an alcoholic, still is, and addicted, if you will, if you want to use that term, to cigarettes. And I remember at the age of, I believe, 14 my dad had a heart attack, and me and my little sister found out and my mum took us to the hospital. And we didn't know anything other than he had a heart attack, and it was the first time I remember being in hospital. So I remember entering that hospital with my sister, who's nine, and seeing my dad hooked up to all kinds of monitors and he wasn't moving. So my little 14-year-old brain said, "Shit. My dad is dead." And luckily he wasn't dead. He started to move. He was just having a nap. But the story is my dad had been drinking, and smoking, and quite frankly doing bad behavior for that imprinting period of my life between zero and seven. I'd seen this all the time. You know, my dad is quite a serious man when he's not drinking. But when he's out with his friends, he's a completely different charismatic, charming character. But what I saw of my dad most of the time was...only time I saw him potentially in a good mood was when he was drinking alcohol. And I chose at a very young age, I made the conscious decision, as did my sister, to not drink alcohol. And it's not a judgement. If you wanna drink alcohol, and you're listening to this, and you enjoy it, and it's not causing you pain or havoc in your life, enjoy fucking alcohol. This isn't a moral crusade to say you shouldn't drink alcohol. I'm just sharing the story about me.

I saw my dad do it all the time and I made a conscious decision that, you know what, I wasn't gonna do it. And in my whole life I've drank less than five times, and I haven't drank any alcohol in the last... Well, what am I now? I'm 38, in probably in the last 18 years, just because I don't wanna do it and I made that conscious decision not to do it, as did my sister as well. And I embraced a life of being straight edge, and I was straight edge before there was straight edge. What is straight edge? Straight edge is just not drinking alcohol, not doing any drugs, not hiring hookers and not gambling. And if you wanna do any of those things, and you enjoy it, and it's not destructive or causing you pain, then by all means do it. I don't care. I'm just telling you about the decision that I made, even though one of the most significant male forces around me was my dad and he was doing the opposite. I chose not to live a life that way. I chose, you know what, I didn't wanna be addicted to alcohol, I didn't wanna light up a cigarette. I just chose not to do it.

Now, how many stories have you heard of the 38-year-old on the flip side that? "Oh yeah, my dad drank all through my life, and the only time he was happy is when he was drinking, so that's why I drink," or, "My dad smoked, yeah, all of his life and he was just around me, of course, all the time, so yeah, that's the reason I smoke." No, that's the reason I don't smoke, that's the reason I don't drink, that's the reason I don't do drugs. You can be the flip side of it. So I don't subscribe to that bullshit philosophy that, "Yeah, because I saw someone else do this, or someone treated me this way, so I'm gonna treat other people this way." You often hear... Oh, controversial subject coming up. You often hear the tales of somebody that is a pedophile, has abused young children. Okay? You hear about this and then they're at the trial and the lawyer comes up with, "Yeah, well Mr. Johnson..." Fake name, please don't sue me if your name is Mr. Johnson and you are a pedophile, "Yeah, Mr. Johnson was abused by his father, his mother, his uncle, his aunt, the Boy Scout leader, the priest, the nun, whoever. So this is the reason that he abuses other young boys." Bullshit. Bullshit. You can make a choice out there if it's a right thing or wrong thing.

Now, if someone's got a gun to your head and is like, "I'm gonna kill you unless you do this," then you still have a choice. You can either die or you can do that thing, but there is still a choice. I understand it's not the best choice in the world. But barring that, if you go, and you go and hurt people, and you know that it's wrong because you live outside of a vacuum, you haven't been locked in a room for most of your life... Again, if you've been locked in your room, you've had no kind of contact with anyone else other than your abuser, no media, no nothing, then maybe you've got a point, maybe you think that's how people are treated. But, again, in over 5,000 clients I'm yet to meet that person. So you can't use that excuse. "Well, it happened to me, and I thought this is how I need to live my life, and that's why I abuse people, that's why I use drugs, that's why I drink." Bullshit. You know what's right, you know what's wrong, unless there's a gun to your head or you've been locked in that room your whole life and your only kind of interaction with somebody was the person who was pouring alcohol down your throat, injecting crystal meth into you, or abusing you. That's the only...and you had no other outside resource to see that was wrong, to have a comparison frame, then you might have a little bit of leverage with your argument when it comes there. But again, like I said, I never met that person. Those people made a choice to do what they do. Don't use the fucking excuse. "My dad drank, my mum drank, my brother smoked, my sister smoked, my uncle abused me, my pastor abused me." Well, if you did it, and you felt it was wrong, and it felt horrible to you, and then you went out and you did it to someone else, that's on you. You can't use that as an excuse.

Stayed tuned for part 2 of this article coming soon!