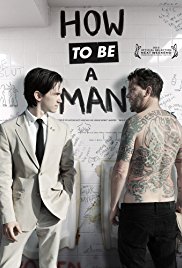 So I already know straight upfront, this podcast is probably gonna get me in the most amount of heat through any podcast I've done so far. And so be it. If you want to send me hate mail, feel free to do it because if you're talking about me, now's the time I'm gonna make you speak louder.

I know this one's gonna ruffle some feathers out there and quite frankly, I'm sick of playing nice. You think I've been hardcore up to this point? I've been holding a lot back and I'm done with that bullshit now. Today's show is called "On being a man" or "How to be a better man." And one of my frustrations out there in the world is with millennials out there who walk through life being beige. Not being black, not being white but being very beige, trying to be everything to everyone all of the time. Like when children are at school and they're participating in a sporting activity and they lose. Yet they still get a nice little award that says, "Hey, congratulations. You know, you didn't really lose. You've just come second." Yeah, but if it's a game with only two teams, you did lose. You are the number one person who lost. And guess what? In life we do lose from time to time. Everything is not rainbows. Everything is not beautiful unicorns.

But in my life, I'm 38 now, there's been a very interesting and sad new thing that's happened over the last 5 to 10 years, where it's not okay to be a man in society. That men are having to be watered down and pussify themselves through fear that feminist hate groups will come after them, because it's not okay for a man to have an opinion, for a man to be a man.

One of the first things is be mission based. If you're a man and you're listening to this, be mission based. What does that mean? It means whatever your purpose, whatever your mission in life, is the most important thing to you. Are you ready? I know I'm gonna get some heat right now but it's okay. I know they're gonna fire bullets at me right now, but I've got my bulletproof jacket on. What does that mean? It means your mission is more important than your wife, your girlfriend, your children. Your mission, your purpose in life, why you are here, your unique soul print on what you're supposed to do is the most important thing. It's more important than everything.

It has been my experience and a long experience with women that when you place a woman on a pedestal and you make her the most important person and thing in your life, they may think that they want that in that particular time, "Oh, I just want a man to make me the most special person in the world and he loves me more than anything else." But secretly over time, they begin to hate you and resent you because they figure you're a loser, that if they're the most single most important thing in your life is your woman and not your mission, they start to resent you and think, "Who is this loser? He's making me the number one most important thing in the whole of his life. That's not who I fell in love with. That's not who I felt these chemical reactions of attraction to. It was because he had a mission. He had something more important than him and more important than me. He had a mission, a purpose for life."

So if you're a man and you don't have a mission out there, I'd argue if you're even really a man, yeah, you may have a dick, you may have balls and you have more testosterone than the opposite sex, but if you haven't found your mission, stop. Stop whatever you're doing now, go into a dark room, sit down and ask your unconscious mind what is your mission. That's the first thing you need to do.

And I know I'm gonna ruffle feathers now but hey, who gives a fuck? Guys and ladies that are listening, how many times have you wanted to go to a restaurant and you've asked your man, "Hey, where are we gonna go tonight?" And your man's been like, "Oh, I don't know. Where do you wanna go?" And you're like, "Well, I don't know really where I wanna go. We could go here, we could go here." And your man is like, "Yeah, we could do either of those things." And secretly as a woman, you want to put your input in, absolutely, but at the same time you want your man to make a decision and say, "We're gonna go here." And if you fervently disagree as a woman you will tell him, "Hey, that place sucks." And that's okay. But you want your man to at least make a fucking decision in the moment. It's what women want most of the time guys, whether they admit it or don't, in my experience of working with many women and having many special amazing women in my life. Be a leader. Make fucking decisions. Even if the decision's wrong, you made a fucking decision and you stood by it. Don't be afraid to lead in your life, at work and in your relationship.

Another thing. Another thing we're taught in society as men now. It's not okay to be angry. Let's talk about our feelings, our hurt and our pain all the time. Oh, anger is bad. Anger makes you abusive. No. As a man, we are angry. It's just inbuilt into us. We could've had what you thought is the most perfect life, yet we still have this fucking rage inside of us. Now I don't mean you go out and you hurt people and you abuse people. I am not saying that but as a man, a man that's worked in personal development for many years, a man that's helped many people, I still have a huge amount of fire inside of me and it comes out in many different ways. We're taught as men it's not okay to have anger. It's not okay to express the anger to men or to women.

And again, I'm not talking about abusing women or anything of that sort, but I'm talking about if you're with your woman and she pisses you off, you tell her, "Hey, you're pissing me off right now." And you don't always have to sugarcoat this stuff. It's okay to be angry. It's okay to be an angry man. It's okay to be in that place sometimes and it's okay to express that. It's inbuilt into us all and all the society tells us is it's not okay to be that way anymore. I'm telling you it's there. You can work through it. You can limit it. You can reduce it and it's always gonna be there on some level and for some of us, it can be really fucking useful for helping us motivate in our life.

Another thing, another quality that's sorely lacking for men in today's society is risk takers, adventurers. Every man wants to grow his beard and yes, I know. I have a beard as well but I grew a beard for a very, very different reason. Because I look good. Without a beard my face looks more too much like a 13-year-old boy. It makes me look better. I didn't grow it because everyone else was growing it. In fact, I held off growing a beard for many, many years because I didn't wanna be like everyone else and these fucking millennials out there that are pussified. It just disgusts me. A real man takes risk, calculated risk. He is an adventurer. He'll stake all the chips, he'll put all the chips into the game. He'll jump out of the airplane with that parachute on. He'll go up to that women he perceives is out of his league or beautiful and ask her for a date. He'll cross over the road sometimes not at the exact crossing. Sometimes he'll go left when everyone's going right but he will take risks because ultimately, a man's most fundamental, most important value in his life, at his core, is freedom.