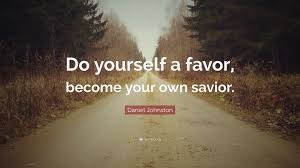 It wasn't till I surrendered to the fact that I needed to give up and kill the person I was, to enable me to be the man I am today and the man I will be going forth, once I killed the person I was, it allowed this badass character to come out. It allowed the savior to come out because this is the man that I needed to save me when I was an 11-year-old, this was a man I needed for all those trials and tribulations as a teen and in the 20s and even up to a few years ago. This was the only character that I could've thought of, that I could've created in my imagination, in my lab of my mind who could've come through this, who could've come through this with the bullet wounds, with the scars, yet made it through and made it through a better person, a stronger person, a wiser person, a person who is more bulletproof.

Basically, I had to man up. I had to grab my fucking balls and all those things I've been putting off because I was too scared. I had to face. So how do you become the savior of your life? Well, first of all sit down and realize that everything that's going on in your life, the good stuff and the bad stuff, yeah, the bad stuff. You created it. On some level, on some vibrational level, on some unconscious level, you created this shit. That's you. And there may be other parties that are involved in it but you created this shit. On some level. Just accept it. Accept it, you created it. But if you created it you can also un-create it and create something in its place. Then ask yourself, if on your cellphone you had on speed dial the one person who past, present or future, if you can project that far, that could come, that you knew if you could meet that person, if they fully got involved in your life, perhaps they're a celebrity, perhaps they're a mythical figure, perhaps they're a god, perhaps they're a character from a TV show, a superhero, a professional wrestler, a professional soccer player, a hockey player for my Canadian friends, maybe a mishmash of them all.

But if you had to create someone that you knew that if that person showed up in your life right now and took over your mind, took over your body they would be able to take control and turn this wrong into a right and enable you to live through and burn through your own limitations, burn through the shackles of what the world's put on you that you allowed them to put on you in the first place because you allowed yourself to be socially programmed into doing this. It's all you. It always comes back to you. But who would be that man? Who would be that woman? Who would be that mythical creature that you would create that you know that'll be able to go through this trial and tribulation that you're going through, that would be able to walk through that fire, that would be able to walk metaphorically into a bunch of ongoing traffic or a bunch of bullets that were coming your way and would be bulletproof like Neo from the "Matrix"?

Now it might not be appropriate for you and you might not need a guy with a big beard. A beautiful beard, I might say. Twenty-one and counting tattoos. A guy that uses colorful language, a guy who calls people on their bullshit but no more so than calling himself on the bullshit, a guy who trains a certain way every single day. Just for that time I train. Just for that time but when the shit hits the fan and I need to default to my training it's there. I train for life but that's for me. A person who meditates every day, a person who does everything but they know they don't want to do yet they do it because they know it's for their future self and their greater self. That's the character I created. But what character do you need to create to get you through the fire and get you onto the next level in your life? They can have a beard, they can have tattoos. Are they gonna be 200 pounds of twisted steel and sex appeal or are they gonna be soft? Are they gonna be gentler? Are they gonna be more in touch with their emotive side? Are they gonna be...speak very articulately? Are they gonna have big pauses, thoughtful pauses between sentences?

I kind of lucked into this savior character that I become, this badass. I lucked into it. I was aware that I needed something. I needed a gigantic kick up the ass, a gigantic shock to my soul in order to get me moving and me coming back from a couple of attempted suicides as a kid, as a child I should say, as a teenager. Just fight it off but it wasn't enough. It was just a consistently not living my life or my purpose, being a pussy, being pussified, not manning up, not being the man I needed to be in the world, being fearful, being fearful of that and trying to kowtow to other people what other people expected of me or wanted of me. So I'd get the most amount of people to like me. When I gave up validation, when I gave up people liking me, I became more successful in all areas of my life. In my career, in my business, in my relationship and more importantly, nothing more important than my relationship with myself. When I gave up all that bullshit.

You are dying. You are dying moment by moment, second by second. The only thing that's inevitable is you will die one day. But you do have a choice on what you do between now, right now, this very moment and that day that you die. Who do you need to create? Who did you need to kill off? What part of you do you need to kill off in order for you to become great? See, you have to go from being that caterpillar sludging along like a sloth slowly in your life. You have to give up being the caterpillar so you can be the butterfly and fly to the next level of your life. So who do you wanna be? Who is your savior? Choose them wisely and create them and start living it every day of your life. And in some time, you'll look back like I did and be like, "Shit. Who the hell am I? Wow. This is the person I needed when I was a kid and he's here. She's here. They showed up. They showed up and they saved me." And you get to own that. And it adds to that bank of self-esteem.

Do it. Do it now. Don't wait. Don't wait for me. Don't wait for someone else. Man up, woman up. Do it. Be your own fucking savior because no one else gives a shit. Only you. Only you can do this. To summarize. Think about what's holding you back, what keeps you stuck. Think about where you want to go, what the next level of your life is. Make an agreement that you have to kill off that person that's been holding you back and it may be sad but you have to do it. Give up the victim mindset. Think about who you need to be, what you need to say inside your mind and in a real world, how you need to look to yourself and to the world, how you maneuver through the world, what will you take and what will you not take.

To quote Martin Luther King, "A man who doesn't stand for anything will fall for everything." So what do you stand for? Write that down. What do you not stand for? Write that down. What are your boundaries? Who is the badass character you need to create in your life to get you to the next level? Write these things down and action them. Action them. Action them. Every day do something. Dress in a different way, speak in a different way, talk to yourself in a different way, do that thing that you're scared of. Do it. Do it now. Start it now. Time is running out. Do it now. Save yourself now because no one else is gonna do it. Save yourself now. Be your own savior. Start today.