Why 12 Steps Programs Are Bullshit 1/2 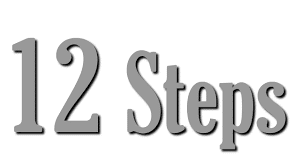 Why the 12 steps are complete and utter bullshit. We're gonna go through these 12 steps today with a fine-tooth comb. Have you ever thought about a fine-tooth comb? I mean, is there such a thing as a fine-tooth comb? Isn't a fine-tooth comb really a toothbrush? But that's another story for another day. I think I just put myself into hypnosis there. So, here's the thing, we're gonna go through these 12 steps today, I'm gonna tell you why I believe they're all bullshit. There's gonna be a companion podcast that's gonna come out next week same Luke time, same Luke place, same Luke channel, or should I say HypnoPunk channel, which is going to be an updated version of my Addiction's podcast, which I believe was in episode about number 10 or 11 when I started these out. But I've got an updated version of that with some new science and some new studies and some new understanding that will be coming out next week.

But today, it's 12 Step Programs, why they're complete and utter bullshit, and I know I'm going to upset some of you out there. And listen, here's my stance on it right now. If you've gone through the program, if you've been successful, if you're no longer doing the drug or narcotic you went in, you are free and you no longer see yourself as a victim, you've been free and clean for some time and you see that as the past, and it no longer affects you. And that worked for you. Great. More power to you. You're in the minority but more power to you. Okay? But I'm talking about the 90% of people that these programs, these steps don't work. And let me define work. Work is not stop for a week, a month, a year. Work as in you just no longer do that shit anymore and you no longer see yourself as a victim and you do not see yourself as a powerless addicted person. That's what I mean. Does it work or doesn't it work? Okay?

So, let's go through the 12 steps, which is for Alcoholics Anonymous but also for NA, Narcotics Anonymous as well and most 12 step processes. Number one, we admitted we are powerless over alcohol or your drug, that our lives had to become...that our lives had become unmanageable. So let's take that apart a minute. We admitted we are powerless over our drug, that our lives had become unmanageable. So the presupposition in that step is you are powerless, that you are weak, that this foreign object, this foreign substance outside of you controls you. So it puts you at effect of the court. And we know in hypnosis and neuro-linguistic programming or any form of transformation, when you're at effect, you're essentially victimizing yourself.

There's a whole podcast I did about victimizing yourself and cause versus effect. You're saying that this outside foreign substance controls you, controls what you do, controls what you think. And as soon as you admit it has complete power and you have no power, no say because there's a gun to your head, and even if there was a gun to your head, you'd still have a choice whether to do it or have your brains blown out. Now, it may not be the best choice in the world but there's still a choice inherent in that step right there. But we've admitted we are powerless over alcohol or a drug and our lives have become unmanageable. Absolute bullshit.

Think, if you accept that sentence you're accepting that you are powerless, that you're always gonna be powerless, that this foreign substance controls you, controls how you treat your family, controls how you treat yourself, your career, your health, relationships, and you have absolutely no say in it whatsoever. It's running the bus. Do you see how it's completely disempowering? That it's complete and utter bullshit. It does not control you because you make a choice to pick it up and you do it. It may not seem that you make that choice. Whether it be unconscious or conscious, you're making a choice.

It doesn't just jump up into your mouth or into your arm and consume you. You're making a choice consciously or unconsciously whether you think you are or not. Yes, you are. You are not fucking powerless. So number one, absolute bullshit. Put a line through that. Number two, in the Alcoholics Anonymous, is I came to believe that a power greater than ourselves could restore us to sanity. So there's a power greater than you. You're so weak, you are so broken that you need to look to a greater power that can restore you to sanity because you are insane right now. So many things wrong with that sentence. So many, many things.

Now listen, if you're religious, more power to you. I'm not. I'm an atheist. But if you believe in God, Mohammed, Buddha, L. Ron Hubbard, whatever, and it helps to make you a better more powered person, that you've got personal power and you're a better person as you maneuver through the world, more power to you. However, that you have to pray, that you have to get on your knees to something that's greater than you rather than digging deep inside and finding that voice, finding that power in you, again, puts you at effect of this cause, that something else needs to restore you. Now listen, if you are drinking too much, you are drugging too much, you are watching too much porn, gambling too much, whatever it is, it doesn't make you insane. You're just doing a stupid destructive habit that's hurting you and you can stop. You're not insane, you're just stupid. Okay? So many things wrong from that sentence.

You have all the power you need within you. Whether you are religious or an atheist does not matter, you have all the power you need to stop this stupid habit. And yes, being addicted is just an habit and you do not need to be restored to sanity because you are not insane. It's absolute fucking bullshit. Number three, Alcoholics Anonymous or NA, Narcotics Anonymous, here's the step, made a decision to turn our will and our lives over to the care of God as we understand Him. Now, where do we begin with that step? Made a decision. Okay, I'm good with that. To turn your will and your life over to God. What if you're an atheist? What if you're like me? Does that mean I can't be helped because I have to believe in God? What if it's another religion that perhaps...maybe I'm a Scientologist.

They're in the news right now, who doesn't necessarily believe there's a being called God. So that means I need to change religions in order to change my life because this magical power, who is a man by the way, because the sentence said it, "He is going to empower me of everything I need." So if I change my religion or I go from being an atheist to being a Christian or any other religion that believes in God that's not a Scientologist, that's what I need to do, I need to give Him...He's a man by the way. Didn't you know that? I need to hand over my will to Him to fix me. How many fucking things are wrong with that sentence?

I'm good with making a decision but you need to hand over your will to somebody else whether it be a religious deity, a religious God or anyone else, again puts you at effect. You're a poor victimized little child or baby that has no choice of this greater power that you probably will never see will heal you. There's so much wrong with that fucking sentence that is just incredible. So put a fucking line through that. Why don't you make the decision to stop doing the stupid behavior and stupid habit, which it is, and we'll get into that on the next podcast on Addictions Updated part number two.

I want you to turn your control over your life onto yourself, your own conscious mind and heal yourself. Okay, number four. Made a searching and fearless moral inventory of ourselves. I think I'm okay with that one. Sit down and think about how it's affecting you each and every way in perhaps your career, your relationships, your health. I think I'm okay with that one. I think so far of all the top three, that one's okay, take a fearless moral inventory about what's going on. I think we can keep that one. I think that one can empower you. I'm okay with that one. Here we go, but number five, hold on, number five is admitted to God, okay, to ourselves, okay with that, and to another human being the exact nature of our wrongs. I don't know how I feel about this. Admitted to God, fuck that. Admitted to ourselves, sure. To another human being, if it empowers you to make change and you need a benevolent witness to observe that and it empowers you, okay, the exact nature of your wrongs.

I'm kind of okay with that. I mean, as far as wrongs you're just doing something stupid. I don't think you're morally a bad person because you do any kind of drug as long as you're hurting anyone else whether those be cigarettes, nicotine, whether they be alcohol or crack, cocaine or crystal meth or heroin. I don't think you're necessarily a bad person. I just think you're doing something stupid so I'm kind of 50/50 on that one. Actually, we've got God in there as well, right? So nah, I'm against that one. I think that's bullshit and kind of works against you. But admitting to yourself is the only part of that that I think is remotely empowering to you. So if we take that and we chop off two-thirds of that step, I think we're doing okay.