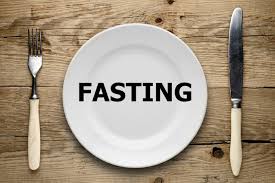 Yes, Google is my friend. Ladies and gentlemen, a study from 1973 for a 27-year-old male, who fasted for 382 days under the supervision of researchers from Scotland University. This is the longest first ever been recorded. This patient weighed in at 456 pounds, which is 207
kilograms, and weighed out 182 pounds. So, he lost 265 pounds or 127 kilos during his fasts. Five years after the fast ended, the patient's weight had been consistently around the value of 196 pounds and had no ill symptoms during or after the fast. Throughout the entire 382 days, which is over a year, patient AB consumed water and potassium. He actually had some potassium, okay? And in the urine and blood collections that were taken throughout the process of fasting and fecal evacuations were infrequent in the latter period of fasting, as to be expected, as the time between stores was averaging, what is this? About two to three days as the researchers claim.

A result blood glucose decrease progressively in the first four months, but it remained in 30mg/100ml onwards. However, by he ended the fasting, the researchers had frequently seen values below 200mg/100ml. The researchers say that despite the hyposmia, the patient remains symptom-free, felt well, walked around normally, and they have his general average monthly glucose levels there. So, that's...also his cholesterol, which was consistent at 230mg/100ml and it decreased to...and it increased at 370mg/100ml during the refeeding period. But, basically, a lot of stuff had changed and the guy clearly didn't die. AB lost, again, 276 pounds during his 382 days of fasting. That's an average of 0.70 pounds per day, which is mostly attributed to the breakdown of fat tissue. And I think we can achieve significantly higher levels of fat oxidation while being keto-adapted without having to reach out for such extreme measures.

So, are we saying that you have to do that? No, but we're saying that a guy lived, had a healthy life. Yeah, he was a big guy, but he went 382 days with that fast with no adverse reactions. And there have been other studies with people, not potentially as long, but the positive effects of fasting. Now, obviously, always consult your doctor. If you suffer from very, very hypoglycemia or high blood pressure, then certainly...or diabetes, certainly, certainly, certainly check in with your doctor before you do that. I'm not saying that you should, but given all is well and above board, and you've checked in with that, then it might be a new tool to play with.

We also know that when you fast the hunger hormone, and I'm gonna brutally destroy this now, I'll spell it to you...I'll spell it for you the hunger hormone which is G-H-R-E-L-I-N, ghrelin, actually it's secretive for the first couple of days, but then what at fast is noticed, myself included, is when you realize that most of your eating is pattern-based or you've been eating three meals, the six meals for such a long time, it's just a cat and a dog that you've been going through, once you go for a day or so of that pattern just goes, and you go into kind of like a little bit...an anxiety when you don't know when you're gonna eat again, you actually are not hungry.

I know it sounds weird and maybe drawing from my record in four days is honestly in those four days I was probably hungry a grand total of about two or three times in four days. And what I mean by that is not head hungry, "Oh, I crave having this now, I mean, my tummy telling me for about five minutes, "Luke, you need to eat right now." But the rest of the time I was not hungry. Yeah, there was mental games that was going on inside my head of patterns that, "Shouldn't I have breakfast because I've done it for 38 years? Shouldn't I have dinner because I've had it for this amount of time?"

It was just breaking those patterns or paradigms down made me realize actually it wasn't...in those four days I was hungry about a grand total of about three times and it lasted anywhere from about five to 10 minutes before it disappeared because hunger is much like an emotional state. If you try and hang on to happiness, one thing's for sure you're gonna lose it. If you try and hang on to sadness, one thing's for sure it will change into another emotion. The same as hunger, it comes in waves, it comes, it goes.

Now, some very, very popular ways of playing around with fasting now are the 16-8 principle where you eat for eight hours, for an eight-hour window at least, and you fast for 16 hours. This can be as simple as having your last meal at eight o'clock at night and not having your next meal until 12 noon the next day. So, essentially, eight hours of that's been taken up by sleep and the other eight hours is just four hours on the front of that eight hours, and four hours in the back of it. So, it's very, very doable and people having great success. They call it I eat intermittent fasting.

Another one for people who wanna challenge yourself a little bit more is a 24 protocol, where you'll fast and you will not eat anything, but you will be able to drink water or herbal teas with no calories for 4 hours of the day and you can eat in that time. But for the 20 hours, you're only drinking water and herbal teas. A lot of people swear by that. Some people swear by having, you know, each week eating their normal meal, and for want of a better word, let's say six meals a day. However, one day a week they'll have 24 hours where they would just not eat anything. They'll drink water, they'll stay well-hydrated, but they will not eat anything. And they will swear by this.

Some people have the three-day water fast, which I kind of talked a little bit earlier on, but I took it one step further, where you go three days without eating anything, just drinking water and having no calories, which can be really a good reboot to your system, which is perhaps a good way. I do a couple of these each year at the beginning of the year, midyear, and the end of the year. And yes, I lose a lot of weight, usually about 10 to 11 pounds, but mostly it's water. But what it's doing is cleaning my system, clearing my mind, and helping to balance insulin receptors inside my body. And I've noticed great results with all of those.

One of my heroes David Blaine had a...did a stunt, for want of a better word, or that feels like I'm being a bit demeanor, I don't mean to be, where he came to England to Tower Bridge and for 44 days and 44 nights he only drank water. And people were imagining...seeing David Blaine doing street magic and all these weird and wonderful things, and they kind of turned against him a little bit like this because watching someone in a perspex box for 44 days above Tower Bridge where he doesn't really do anything is quite boring. But when you realize the metaphor behind it was actually you are far more capable of going further and pushing yourself than you ever imagined. And you realize the beauty in this suffering that can happen, and it's a good form of suffering, going back to an earlier podcast on suffering and stoicism, which I believe was a podcast around podcast 13, 14.

David Blaine had adapted from "The Hunger Artist," which was a Kafka book in the early turn of the 19th century, which was a man to impress...To entertain the king, he just stopped eating. And the whole book is based upon him not eating and him being a hunger artist, which is what David Blaine adapted to, to do a real-life version of that if you...or not a fictionalized version of it. But there are many, many, many benefits out there.

There are many studies out there where people have been able to cure, as you're not allowed to say the word cure if you're a professional who works with people, you're not allowed to say the word cure. These are not my terms, these are terms of research papers that I've read that claimed that people that had type 2 diabetes, I believe, that is non insulin dependent, that people who did fast under the supervision of a doctor and medical team were able to reverse the symptoms of diabetes and no longer be categorized as type two diabetics. There you go. And they've also done studies with people with various malignant tumors inside, cancerous tumors, fasting, and amazing things happened to those tumors i.e. them shrinking, but those are research studies you can do for yourself online. Do your due diligence. Stop being lazy.

The power is you don't have to have a crazy workout regime, you don't have to be on a miracle supplement, a miracle diet. See that again, weight watchers, your money, or Dr. Bernstein, and have shots of vitamins and vitamins from my American friends shot inside your body. Sometimes by going back to evolutionary biology, by eating nothing, by allowing the body to go back into this process can correct a lot of ills, can reset your metabolism, can help you get rid of a shitload, pun intended, of weight, to give you more mental clarity, and also more inner strength that, "Wow, if I can go four days without eating, what else can I do in my life?"